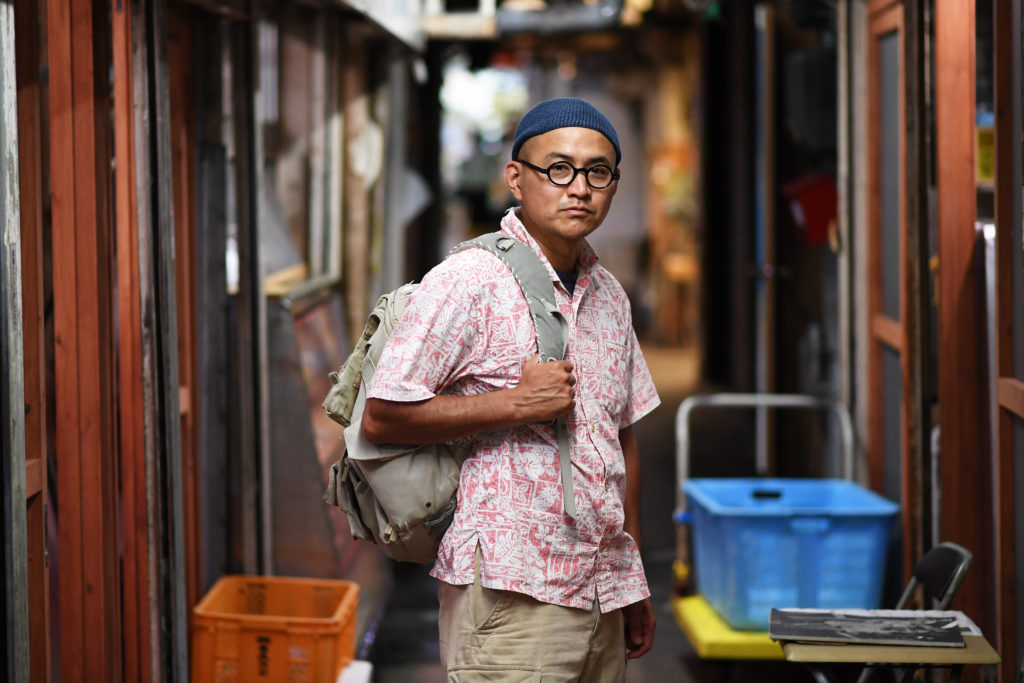 Made his debut with "Hana to Hyotai" (2009), a film about unreturned soldiers who remained in Thailand after the war.
Released "Soma Gehana Part 1" (2011), which took place in Minamisoma City after the earthquake.
The Horse of the Festival" (13) was screened in the competition section of TOKYO FILMeX.
Grand Prix in the Asian and African Documentary section of the Dubai International Film Festival.
In 2016, he stayed in Sao Paulo, Brazil under the Agency for Cultural Affairs' Training Program for Artist-in-Residence.
Author of several books, including "Bakoku. Currently lives and works in Okinawa Prefecture.

Born 1979 in Okawa City, Fukuoka Prefecture. Lives and works in Nishihara-cho, Okinawa.
Documentary film director. Has reported from more than 30 countries, mainly in Asia.
Has contributed articles to newspapers and magazines in Japan and abroad, and has produced documentary films and television programs.

In 1998, while a student at Fukuoka University, he began traveling around Asia as a backpacker.
In 2000, he happened to visit Peshawar, Pakistan. In 2000, he happened to visit Peshawar, Pakistan, where he contracted dysentery in the tribal area on the way to Afghanistan from Dara, a town of smuggled guns, and was rescued by the Taliban on the way back. The gap between what he knew about the Taliban from news reports and what he actually experienced led him to become interested in first-person documentary filmmaking, and he dropped out of university.
In 2002, as part of his second-year internship, he worked under film producer Takuji Yasuoka to make a documentary about the lives of his classmates at the Mitsui Miike School of Mines in 1960, in the midst of the Miike Struggle. In 2002, while still in school, he began working on documentary films, and in March 2003 he joined the set of Hiroko Kumagai's Miike.
In March 2003, he joined the set of Hiroko Kumagai's "Miike." In 2004, his graduation project, "Dear Human," was released under the direction of Kazuo Hara. Receives a scolding from Principal Tadao Sato.
March 2004: After graduating from the Japan Academy of Moving Images, he entered the Peshawar Society. Went there with the intention of filming, but there was no time to shoot and returned home without being able to turn the camera on for even a second.
January 2005: Studied under freelance director Moriaki Endo, head of DNA. Accompanied Endo to cover GAM after the tsunami.
From September to November 2005, covered the election of a member of parliament in Kabul, Afghanistan, and presented the footage as a director on CX's nightly news program (News Japan). Since then, I have been filming and editing alone, making R videos.
In 2006, he started to cover the remaining Japanese soldiers in Thailand. Occasionally received work at a Japanese TV station in Thailand.
In 2009, he made his directorial debut with "Hana to Hyotai," a film about unreturned soldiers who remained in Thailand after the war.
In April 2010, he started teaching media literacy at Bunka Gakuin High School for one year.
In 2011, he released "Soma Gehana Part 1: Memories of a Stolen Land" (11), a film about Minamisoma City after the nuclear disaster. The film was screened at international film festivals in Yamagata, Hong Kong, and Edinburgh. Won the Cultural Anthropology and Sustainable Development Award at the Jean Rouch Film Festival in France.
In 2013, he released "Festival Horses" (13), which follows horses left behind after the nuclear disaster. The film was screened at the Competition section of TOKYO FILMeX, the International Documentary Film Festival Amsterdam, and the Etude Verdade Film Festival, the largest documentary film festival in South America. The film won the Grand Prix in the Asian and African Documentary category at the Dubai International Film Festival and has been screened at over 20 international film festivals.
In 2014, he was invited to the largest documentary film festival in South America, which led to a long stay in Sao Paulo, Brazil.
Released "Reflection" in 2015. Screened at the Vancouver International Film Festival.
Since 2015, he has been living in Sao Paulo, Brazil under the Agency for Cultural Affairs' New Artist Training Program.
Stayed in Okinawa Prefecture in 2017. Involved in short films and news programs.
In 2019, "The Forced Eviction Case That Wasn't Told" (48 min.), which follows the forced eviction of Nikkei in Santos, Brazil, will be broadcast on NHKBS-1 Special.
Okinawa Santos" 90min (2020)
2020 "Okinawa Santos" (filmed, directed and edited), a film version of "The Untold Story of the Deportation Case" with completely different grammar and content, will be screened in the competition section of TOKYO FILMeX in 2020.

Since 2011, we have been producing documentary films made by Yohki Matsubayashi as Sanjyoma Film, but since 2013, we no longer live in Sanjyoma and will be working under this name starting in 2020. I mainly produce documentary programs and films.