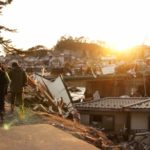 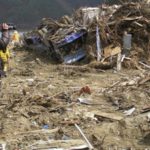 Two weeks after the devastating and disastrous hits of earthquake and tsunami on March 11th, 2011. Four filmmaking crews, including MORI Tatsuya, drive a vehicle to the disaster site in the eastern Japan. Their aim is to just acknowledge what happened to that area as profession of engaging filmmaking, actually not intended to make a documentary film.
First, they head towards the Fukushima Daiichi nuclear power plant, which still try to get out of crisis situation. The closer they drive a vehicle to the plant, the higher numeric value of their dosimeters indicate. Continuous beeping alarm of dosimeters never stop. Along the way, the police pull over the vehicle at security checkpoints since the government sets down area within 20km of the power plant as an off-limits area. In this situation, the crews stop over a hot spring inn and discuss what is going on with locals. Because of no limit radiation level, they go and get some protective gear at a home development store to assure their
health as much as possible. With putting on those masks and tapes, the crews laugh at their unusual style each other; however, they are in such serious surroundings. At 8km short of the off-limits area, their vehicle goes flat. Those 4 crews decide to change their destination without seeing anything except hearing the alarm.
Actually, Fukushima is not only a devastated area. The four drives the van and enter into the area tsunami struck. They witness literally unseeable scenery. What they can see is only endless rubble of house and buildings at the point of 5km from the coastline. Crews can merely talk but only sigh. MORI visits a hospital where patients lie on stretchers everywhere, and listens to a doctor who needs to make the most difficult decision to save as many patients as possible. At a safe shelter, he talks to an artist gives children comfort by playing with them. Moreover, he joins mothers who search for their lost children’ s bodies in the debris. MORI keenly sense urvivors’ grief and unfocused resentment.
At last, the four encounters a place found bodies lay out. Bereaved family members throw sticks at crews and storm why they shoot bodies. Crews always think how the disaster victims would feel during this shooting, but victims cannot accept the four and their cameras. What is documenting? Radio news conveys the radiation level is not so a big problem for human health at all.