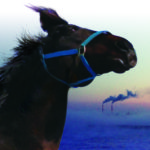 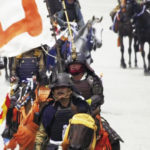 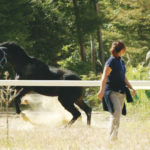 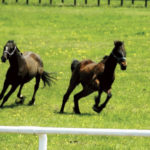 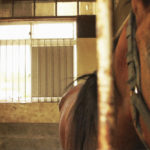 The Horses of Fukushima

No one could have ever imagined the absurd fate awaiting Mirror’s Quest and the other horses of Fukushima: almost dying in the tsunami; exposed to radiation inside the 20 km exclusion zone surrounding the nuclear meltdown; left for weeks without fodder; shut away in stables for months because of government red tape.

A third-generation rancher, Mr. Tanaka had 40 horses within the 20 km radius of the nuclear plant. In March 2011, he was forced to evacuate immediately after the nuclear accident, and had to abandon the horses. Only some weeks later was he permitted to re-enter the restricted zone, to find many horses starved to death and others suffering from trauma and disease.

The horses had been bred and trained to participate in the spectacular annual horse festival of the Fukushima area, Soma Nomaoi, which celebrates the contribution of horses to human society, as partners in warfare and farming. It is a festival with a proud and celebrated 1,000-year history, but now the horses have become a headache for the authorities.

A horse meat industry flourishes nearby because horse meat is considered a gourmet delicacy in Japan. Ironically, however, thanks to the nuclear disaster, these horses will be allowed to live out the full span of their lives, without any likelihood of being slaughtered for food as they grow older.